So this is a short intermission in interviewing you lot to bring you a very special interview, and certainly the most prolific so far that’s been on my blog. I present to you a chat with who is possibly the Prince of Grimdark. It is none other then the founder of SPFBO, critically acclaimed author and the mastermind behind writing awesome little shits, Mark Lawrence himself! Turns out he’s a lot more then just his books. Speaking of his books, pick them up! And yeah….this is only a few of what he has published!

Speaking of, I really need to read more of his books. 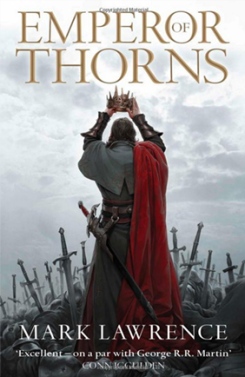 I’m a fulltime author, as of 2015 when the entire Advanced Research Centre, where I worked as a research scientist, was closed. I write fantasy and science fiction.

I develop as I go. I see the value in planning but for me it robs the writing process of excitement, so I let things unfold as I type.

Right now I am writing a short story for the trilogy that is currently in the process of being published. The story sits between Grey Sister, which came out in April, and Holy Sister, which is due out in April 2019. I’ve just finished my book for 2020, The Girl and the Stars, which begins another trilogy set on Abeth, the world of the Book of the Ancestor trilogy. When I’ve finished the short story I’ll start book 2 of that new trilogy, due out in 2021. In amongst all that, I am actively involved in proof reads of the US and UK editions of Holy Sister, and copy edits and proof reads of the books in my scifi trilogy, Impossible Times, all of which is due out in 2019, starting with One Word Kill.

I have quite a few of those! I’ll pick Nick Hayes from the upcoming One Word Kill, my first published science fiction … well, at least my first openly scifi book. I say scifi but it’s set in London in the 80s. I guess the vibe is more Stranger Things meets Ready Player One. Nick is 15 when we first meet him and in the process of having his life turned upside down with a medical diagnosis. On the plus side he is a mathematical genius of stellar proportions, and has the backup of his group of D&D-playing friends to navigate an increasingly strange set of circumstances.

I think what makes Nick different to my previous characters is that apart from his intelligence he is very ordinary, and that’s underlined by the setting. Like the reader he has to deal with everyday life. In my fantasy books the characters survive in harsh and very different worlds, whereas Nick has to go to school, put the trash out, cycle to his friends’ houses etc.

Dunno… I think they will come up with more interesting stuff if they ignore advice. And if they don’t have the motivation to carve their own way in then they might be in the wrong game.

Well, I’ve written many books. 16 published or due for publication, a stake in another trilogy, 5 more in a drawer, parts of several others… In my first published work the setting was the real world and the aging ruins of a civilization much like ours might be in 50 years. So certainly I took a lot of inspiration there.

I don’t find writing books hard. I guess the “hardest” part is patience. I am not a particularly patient person and yet writing a book is a slow process. You want to get to the “good” bit, but if you rush there then it won’t be good. This may explain in part my lack of planning. If I don’t know where I am heading then I am in less of a rush to get there.

I don’t really have an answer for that. I think as a writer you need to love every chapter. If something feels dull or dragging or like filler … then what is it doing there? That doesn’t mean that something has to explode every page – it just means that every chapter should be vital and contain your best writing.

Hopefully I learned some subconscious lessons! But nothing that I could put my finger on right now.

I don’t think about it too hard. I just form as clear an idea about who I am dealing with early on and then let them run free. I guess the understanding builds from interactions. I don’t so much ask how the character will act in this or that situation. It feels more like watching what they do and then adding that discovery to the list of knowledge about them.

Well, I have 2 more books to write for my current contract. So that! And alongside it … whatever the mood prompts me to do. If my scifi does well then some more scifi for sure. Maybe go back to a Broken Empire book I have part-written.

Not sure. I don’t think I would go back to science. I am getting a bit old for the cutting edge and have no interest in management. Maybe something in computer gaming. I wrote some lore and missions for an Xbox game (Ashen) last year and that was fun.

What is your preferred method to have readers get in touch with or follow you (i.e., website, personal blog, Facebook page, here on Goodreads, etc.) and link(s)?

I am sprawled across social media like an octopus that’s been racked by the Spanish Inquisition. I defy anyone to be unable to get my attention.

This needs an overhaul, so here it is! The name is Michael Baker, I'm currently 30 years old, and completely devoted to writing fantasy! I'm also a freelance writer in the gaming industry. Why hello people! Good to have you here. Welcome to my mad, dark world. *clears throat.* Not too much to say about me. The name's Michael Baker but I'll be publishing through Michael R. Baker. I'm a guy from the North-East of England; blogger, gamer and fantasy writer. Writing has been my life for most of it, with most of my genre in the fantasy and horror department, though I'd love to dabble in Sci-Fi too. This blog is a personal journey for me, as well to discuss things that are important to me. That includes supporting awesome works from you amazing people, novels, video games, and my own path through life.
%d bloggers like this: