Got a very nice dev interview to show with you guys: Nate Austin, owner of Worldwalker Games and the lead dev behind Wildermyth, a really cool game.

Quoting the steam page, “Wildermyth is a myth-making tactical RPG. It empowers you to craft iconic characters who grow through deep, rewarding battles and interactive storytelling.”

I’ve had a lot of fun with this excellent game so far, and I recommend you give it a shot. Go pick it up here! Click on the legacy card from one of my earlier playthroughs to go to the steam page. 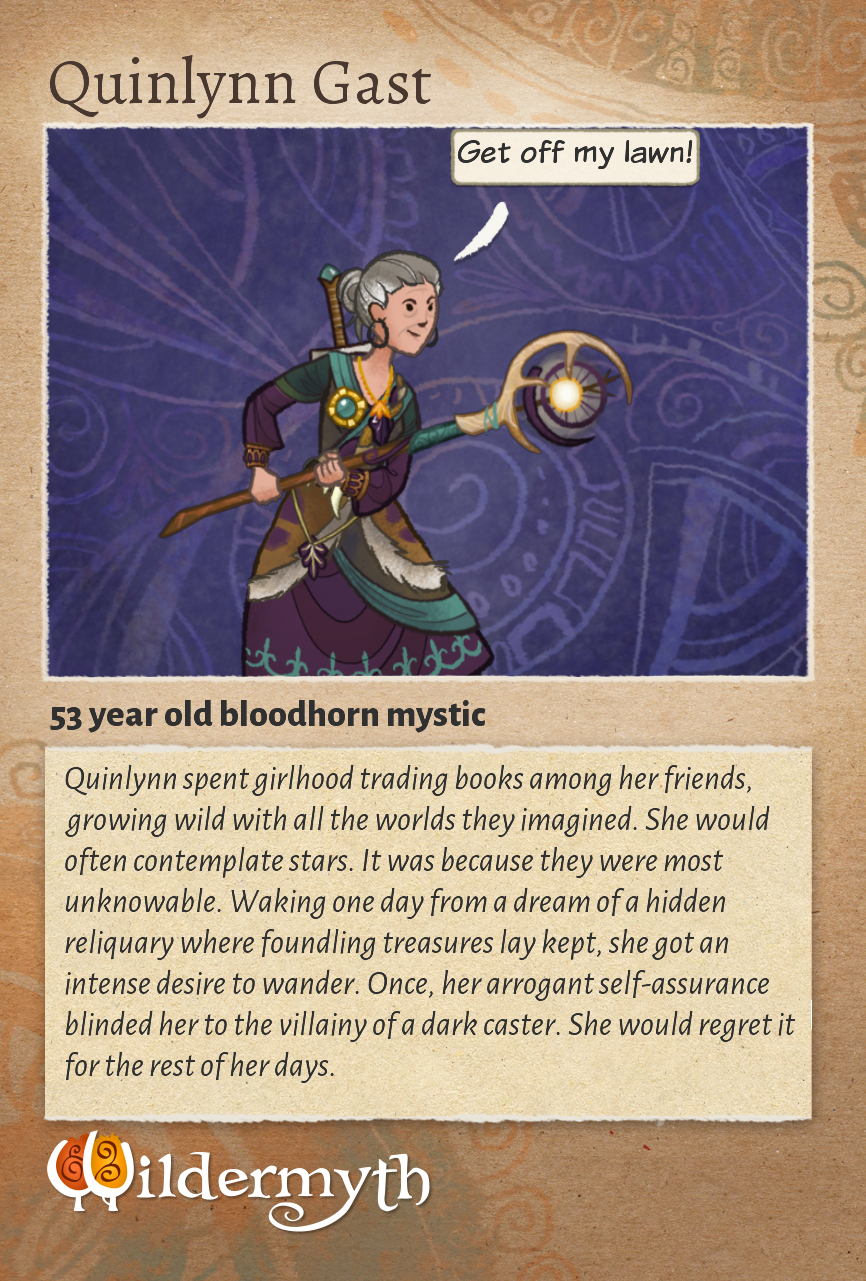 And now to Nate. Enjoy!

First of all, tell me about yourself! What do you do?

My Name is Nate Austin, I’m the owner (along with my wife Annie) of Worldwalker Games LLC, and the lead developer for Wildermyth. I do a lot of things these days but nominally I’m a programmer. I also do a fair bit of design, communication, marketing, project planning, and administration.

What does being a game designer actually mean?

Because games are so different from each other, “game designer” doesn’t have a single meaning. For Wildermyth, it just means someone who has played enough and understands enough of the game to intelligently propose changes and additions. So this includes most of our team members and some of our players. It’s a pretty darn vague definition, particularly for our game, which is a mash-up of a bunch of different stuff.

In a broader sense, a game designer is someone who’s willing to grapple with all the nitty gritty systems that go into a game, and to do the hard work of following the consequences of design decisions through each of those systems. An ability/willingness to analyze systems, think in story terms, empathize with various types of players, and just generally imagine your way through the game time after time with small tweaks applied… That’s what I think it generally mean.

There has been a great deal of controversy in recent years about micro transactions in gaming. Not so much an opinion, but why do games tend to cut out content to sell later as DLC and lootboxes? Is it to do with development costs? Or is it time related?

Making a game is expensive, and the market is crowded with great games. Developers, particularly at big studios where there are investors involved, are under a lot of pressure to make money just to stay in business. Many more people want to make games than the market can fully support. This makes things even worse. It’s not that developers are evil or lazy, it’s just business realities.

As a self-funded studio, we have the luxury of being able to make our own decisions about stuff like that, and we’ve decided not to do microtransactions or lootboxes. For us, making a game we’re proud of is a top priority. We may decide to sell some DLC after we launch the game. We need to make money at this if we’re going to keep doing it.

We’ve put in, at this point, 5 years of our lives, and that’s time we could have been making money doing something else. So the pressure to earn it back is real. Hopefully the game is a hit and we’ll be able to keep producing more content for a long time. But if not, we’ll have to go get real jobs again.

Wildermyth is a character-driven procedurally generated tactical RPG. You start with a band of farmers, take up arms, and over time turn them into iconic heroes. They have histories and personalities, they age, get in relationships, get maimed, die, retire, and new faces come in. Your favorite heroes go into your legacy and can be recruited in to future playthroughs. The game uses a papercraft aesthetic and stories are delivered in a comic format. The stories are different every time you play, and take your heroes’ personalities into account.

As anyone who creates anything, we must all deal with criticism from consumers. How do you go about it particularly in the prolific and viral standard of gaming today?

We are very active about communicating with our audience. We try to respond to every piece of communication through every channel we can (steam, discord, reddit, social media, bug reports, etc..) We don’t always succeed at this, and we won’t be able to keep it up as the game scales, but it’s the goal.

This is an approach that I learned when working at Riot Games and I think it works really well. Most of the time players just want to be heard. When they feel ignored, lied to, exploited, that’s when things get toxic. If you’re really present in the community, there’s much less of a chance for things to turn sour. But, once they do, it’s VERY hard to fix it.

As a developer I want to be programming, making the game better, but in truth it’s really important to take time away from that to talk to players first.

What advice would you give budding developers into taking the plunge into game design?

Make something. Make something small first, smaller than you think could possibly be fun. It will still be surprisingly complex and you’ll learn so much more from a finished project than an unfinished one. Read books and articles, but not too many. Focus on making things, and the lessons the books and articles contain will make so much more sense.

If you still have time to play video games, what are some of your favorite ones to play?

We don’t have much time these days with 2 small kids, but we still play D&D, I’ve been playing a lot of Rimoworld, some Baba is You, and we use to play a ton of XCOM, Skyrim, Portal…

What inspires you to do what you do?

I’ve wanted to make games since I was little, so this is pretty easy. For our current project, playing Dungeons & Dragons is actually a big one. We wanted to capture the sort of free-wheeling storytelling experience that you can have at a tabletop. Obviously there are huge limitations in a computer game, but it’s definitely a big inspiration.

Reading fantasy novels, and watching movies/ shows (Avatar: TLA, Korra, Dragon Prince, Secret of Kells), and lately, reading the stories that people tell about the heroes they’ve made in our game, which is an unexpected and super cool thing.

What is the hardest part of your job?

All the non-programming stuff. There’s just so much STUFF that has to happen to release a game, and someone has to do it. Dealing with build systems, version control issues, infrastructure, reading crash reports, talking to people when I’d rather be “working,” responding to emails, researching publishers, researching marketing best practices, filling out forms… So much stuff. But at the end of the day we’re our own bosses and that means a lot. It’s a powerful motivation to get the stuff done anyway.

What was your favorite thing about game development? Is there anything you find difficult or challenging in dealing with the struggles?

My favorite thing is laying out a new system, or executing a clever optimization, something like that. I really enjoy the craft, and I like building stuff. But that work is pretty rare, and in fact I save it up to reward myself for getting through a lot of the more “boring” parts of my job.

Personally, I’ve struggled a lot with social isolation over the last few years. Since we’re a self funded team and we work from home, there’s not much social interaction in my day. That’s been really hard.

What lessons have you learned from your first game?

Ha. Make it smaller. Don’t write your own engine. I don’t know, that last one’s tricky. We did build our own engine, and it was a pretty questionable decision, but it made me a much better game programmer, so it’s a tricky one.

Definitely though, I wish we had kept the scope down a bit, and picked an idea that had more of a clear “hook” or “gimmick” than “A fantasy RPG.” I think when a lot of people look at our game, they see something very generic, even though we’ve worked hard to make sure that it isn’t. That’s a tough one.

We’ll be working on Wildermyth for quite some time if all goes well. We’ve just hit Early Access, so we need to get to 1.0, and then assuming that goes well, we will work on supporting that and adding DLC. After that, we’re not sure, but we have some fun ideas.

If you couldn’t be an game developer, what ideal job would you like to do?

I’d like to work on software tools (for artists, or other game/content developers.) I think I’d be good at it and get a lot of satisfaction out of making people’s workflow easier, more efficient, safer, etc.. Most software we use is pretty bad, but it doesn’t have to be!

What is your ideal video game if money and time was no object?

Well, this is embarrassing but we’re sortof making it already. There are a few things we would change if we had 10x the money, but, not too many things. We’d probably have a real office and ideally a local team, and a producer, community manager, and one or two more programmers.  Things would get done faster. But Wildermyth is definitely the passion project.